I’ve just put a pair of Mikunis from a 900SS on the venerable old Paso, but I’m struggling a bit with the various connections.
I know that the fuel pipe connects to a black plastic T-piece between the carbs, but there’s two of 'em! One is a little larger and is pretty much level with the float bowls, and the other is slightly smaller and on a level with the bottom of the throttle slides. I’ve put a couple of arrows on the attached photo to point them out. 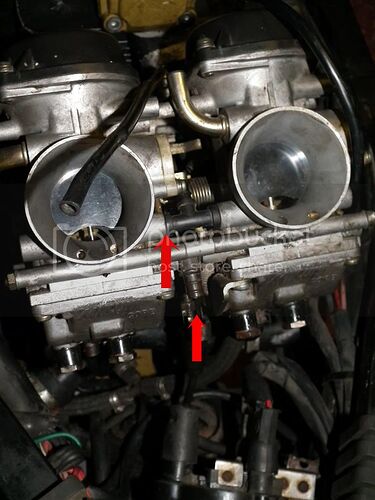 Anyway, what I need to know is which of these is the actual fuel inlet? (I think it’s the lower one) And what does the other one do? And where should it be connected to? I’ve got visions of hitting the starter button and the whole thing going up in flames fed by the fuel pump until the juice runs out!

Also, there are a couple of large brassy coloured tubes (you can see one exiting just above the right hand slide) that don’t have any obvious function. Should they be connected to anything?

Having just bunged 'em on and hit the starter button it just farts and bangs at the moment, but I’m sure it only needs a little tweak to get it to go crobba crobba like it should. Any help appreciated.

Well, I’ve made some progress.
I was right in my guesswork about the fuel connection, and I connected the fuel pipe up to the lower of the two T-pieces as arrowed in the piccy. However, having tested everything it still won’t fire.
I know there is fuel getting through, as when I turn it over without the air filters on I can see some traces of fuel spit back through the carbs. The float bowls are full, and the overflow returns back to the tank OK. The choke slider is working, and I’ve checked for sparks etc. The black slides don’t move when the throttle is twisted, but the butterflies do, as they should. I understand this is normal.
When I took the old Weber off it was working fine and started on the button. So it’s got to be something peripheral and connected to the carbs.
So…two questions.

What is the significance of the second of the two black plastic t-pieces? And what is the function of the two 90 degree “elbow” tubes that exit the carbs above the throttle slides? I have tried blanking these off but it doesn’t make any difference, so what are they normally connected up to on the 900SS? I’m pretty sure if I can get the answer to these questions I can figure out what’s wrong, but I haven’t been able to find any workshop manuals or the like that explain what they are there for.
I mean, is there anything special about these Mikuni CV carbs that needs preparation before the thing will start again? I’m used to proper DelOrto carbs that stand the right way up and just have one slide, and I’ve never messed with any of this Japanese stuff before, so don’t really know if I’m missing something.

HELP!..before I put the Weber back on.

No idea, but when you get it fettled let me know how it is and I may do the same, my Webers seem ok though, well apart from damp conditions when it shoots flames out …

Spaggy, you’re right about the lower black plastic pipe being the fuel pipe. The other one, and the two brass fittings are all for emissions pipes. On the 900SS all three go to the small triangular plastic box on the left side of the frame. Have you checked the diaphragms aren’t perished by lifting the slides manually and watching them drop nice and slowly? The throttle cables control the butterfly, as you’ve stated, the diaphragms will only lift when air flows through the carbs. Not sure what else to suggest? Hope that helps.

I’m posting this on my phone, and I’ve taken a couple of pictures. I can’t easily post them to here, let me know if you want me to email them to you, or I can stick them on the DOC Facebook page if it helps? The two pipes from the top of the carbs do have little filter type units fitted in them, but I couldn’t tell you if they are simply filters or one way valves?

Thanks Nick.
If you can email them to me on spaggy@docgb.net that will be great, or upload them to the new photobucket photo dump (see the “Pictures” section of the forum for details) and add them to the folder where my picture above is stored. No use putting them on Facebook as I don’t subscribe.
With a bit of luck I’ll get some life out of it over Christmas.

No problem, they’re not great quality as they were with my phone in the workshop, if you need any others let me know

Thanks for the help Nick, but what did you do with the photos

Sorry, life took over, I’ll try to get it done tomorrow.

any good spaggy? ive a manual here if its any help, i can pop it up to you if need be. ive just sold a set of these, if i can find any piccys of the pipe set-up i’ll mail it over. i can’t remember off the top of my head. two pipes have inline valves which go to triangular box’s on the n/s of the frame i know for certain.

he one at the bottom without a pipe on is the inlet, the other two are the ones with the valves in that go to the triangular catch tanks. ive got a set of those if you need them. 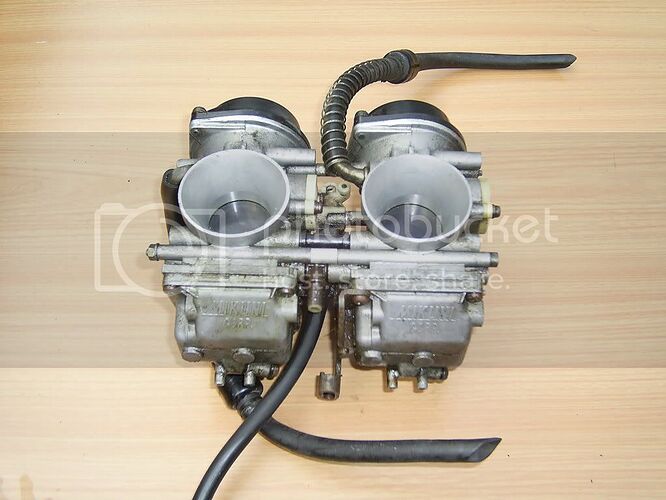 Thanks Richy.
I don’t think I need the manual (yet!).
As far as I can see everything is connected OK but it still won’t fire.
I’ve not really had a proper look the last couple of weeks 'cos it’s been too damn cold in the garage and I’ve had some more desperate stuff to attend to, but I intend to have another look shortly, and I’ll let you know what happens.

Hi, Spaggy, just taken the carbs off my 94, 900SS. The lower T connection is the fuel feed, the upper one returns the overflow to the fuel tank. Theres a small filter inside the fuel delivery pipe just in front of the T connection - it might be worth checking that out, it’s very fine.
The two large pipes fitted to the metal elbows on top of the carbs, the ones with the small black inline filters, they supply atmospheric pressure below the diaphragm that lifts the slides. If they’re blocked, the vaccuum above the diphragm wont be strong enough to lift 'em. It may be worth checking to see if they’re clear as the filters could be partially blocked with grime. They should also have a long spring sleeve on the outside of them or the pipes might kink when they’re routed down and across to the triangular tank on the frame. If all the above are ok, the only other thing I can think of is that you might have a split carb diaphragm - the only way to check is to take the black covers off the top of the carbs. The other diaphragms worth checking are on the fuel cut-off valves, they’re under the white plastic covers on the side of the carbs (watch out for the spring). If they aint lifting properly, you’ll be starved of fuel. If none of that works it might be worth stripping the carbs down and getting them ultrasonic cleaned to clear any crap out of the fine jets hidden away in the carb bodies. Before you get that done (if it has to get that far) check that the mixture screws aren’t siezed in (they’re under the little rubber plugs in front of the float bowls)…if they are, i’d go and sit in a corner and start moaning softly…and then hit e-bay or the wanted forum.
Hope this is of some use
Bry

I finally managed to get the best to fire up again a week or so ago.
It wouldn’t do it on the bike’s own battery, so I gave it a kick from the car battery via some jump leads and tried different choke settings etc.
It still wouldn’t fire, so I started flicking the kill switch on and off, more in frustration than anything else, then as i took my finger off the button, the first sign of life was a big backfire, so I knew something was working.
Anyway, after turning it over for maybe 15-20 seconds, a few stutters later, away it went. Bingo.
It’s a bit farty and bangy off of no throttle, so I think the pilot jets maybe need sorting, or maybe the needles and mains.
The carbs came off a 750SS, which may have a different set-up to the 900. Does anyone know for sure to save me wading through loads of manuals and/or parts books to find out?
Looking good for WDW on it!