Hi, I’m new to this forum and have returned to Ducati ownership after a 3 year gap. I have just acquired a 1981 Pantah 500 sl in race trim. The motor is a bit rattly so I’m thinking of a winter strip down and rebuild. Oh joy! Not what I wanted to do this winter.
I’ve had bikes for over 35 years, BSA, Norton, Suzuki, Yamaha, Honda, Triumph and of course Ducati. My last 2 Ducatis were a 750 Sport and a Paul Smart 1000le. I used to work in the service department of a large motorcycle dealers so I’ve been around loads of bikes for a long time.
Stay safe everyone and happy riding

Hello, be nice to see that out and about, we get over that way from Manchester quite a bit

Hi Martyn, let me know when you’re riding this way and I’ll try and get the Ducati out

Hi, fellow Ducati and classic bike race nut located in Chapel-en-le-Frith. Sounds like an interesting project. Can recommned the Darly Moor club test days when you want to give the Pantah a run. Phil

Hi Phil, thanks for the tip. The bike is an early Pantah and has a lot of road gear still attached. It’s not really been set up for racing as the usual modifications haven’t been done to either the motor or the frame/running gear. It’s a road bike masquerading as a race bike. Very pretty and slightly pretentious livery! If I was going to race/parade it, I would have to spend quite a bit of time and money on it to get it anything like.

Would be fine for a parade, or one of the test days I’m sure. Warning though, once you put it on track you’ll contract the racing bug…the only cure for which is bankruptcy. 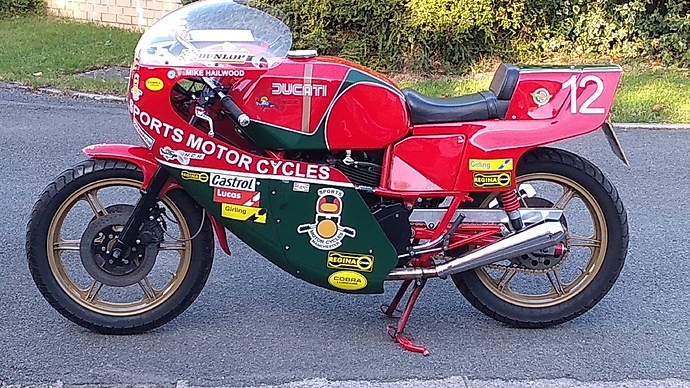 v nice. we need more pics like this on here…