New to Ducati and DOCGB!

as I’ve already had a question answered in one of the other sections, thought it only polite to do this bit!

so hello from Lincolnshire… bought a '77 darmah SD at the end of last year, only managed 60 miles on it then filled up the tank to discover it leaked…

anyway what with christmas and stuff took me a little while to sort out a replacement tank which is now away with the bodywork at the painters… we’re booked in for a track session at the Festival of 1000 bikes in July so better have it back together by then!

although shortly after passing it became more interested in cars for about 10 years, just riding other peoples during that period… since getting back into it, had a couple of old british bikes followed by a selection of Guzzis, a Morini, and currently have a pair of Hinckley Triumphs and the Darmah…

thats enough from me for now!

Welcome to the club/forum, any pictures!?

seeing as you asked, here he is…

the photo is quite flattering

not decided on on a paintscheme yet - am thinking of black but with the stripe in a different colour… and dont mention the blue shock springs… everyone mentions the blue shock springs!!! the bike was blue in a former life… its quite an early Darmah, the engine and frame numbers are both in the first 100 of the series…

and can I sneak in my previous black n gold bike 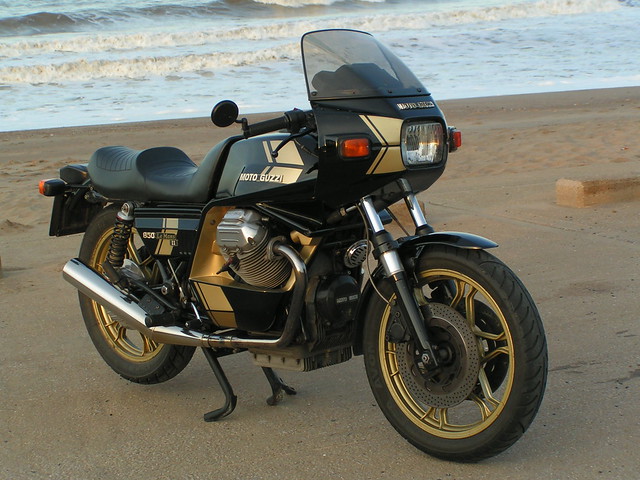 And welcome from me! Nice bikes, esp the paint scheme on the Darmah … not sure about the blue shocks though!

Well I like Blue, but it is certainly out of place there.
Don’t mess with the Black and Gold! It’s Classy, Classic and just looks right, a stripe in any other colour will get more questions than the Blue shocks.
I was going to say Welcome, but then you stuck a picture of a ditch pump on our forum

If you are within a reasonable distance of the North Lincs Branch meet, it is tonight, and then every month Second Tuesday, Salutation Inn on A46 at Nettleton near Caistor.
If you are further away in the large rural expanse of Lincolnshire then enjoy the roads on your Darmah, don’t tell anyone there are some pretty good stretches with hardly any traffic on them, and I will hope to see you out n about when it gets a bit warmer. Almost there at 8 degrees today, a whole 24 degrees warmer than the -16 I saw on Saturday morning. We just need a good downpour to wash all the salt off, and the track will be open.

I was going to say Welcome, but then you stuck a picture of a ditch pump on our forum

thanks for the er ‘welcome’ Steve

working shifts also means that sometimes i’m able to get out and enjoy them during the week…
as for the colourscheme, the more I think about it the more I’m comming round to keeping it black and gold - with red shock springs?