Hi all, from Cambridgeshire currently restoring a 74 750 GTES my first ducati… and looking forward to riding it, hope to complete the restoration before next years Manx GP. The bike had spent the last 30 years in a garden shed and looked quite bad! so far I’ve had the forks re-hard chromed and straightened, all the chrome parts polished and re-chromed the rims and headlamp triple plated. All of the ally parts:- hubs, carbs, fork sliders and triple brackets vapour blasted. Fitted new bearings to hubs wheels are being rebuilt soon. The engine is being rebuilt by Carl Harrison looking to need new pistons valves and seats. So expensive but will be worth it ?? The bike was gifted to me by my brother, I’ve been nagging him to get it back on the road for the last 20 years! he rides a 900ss still but not sure how long as he was diagnosed with multiple myeloma last year. So will be a memory of him, we are hoping to ride to the iom next manx gp so fingers crossed we will make it ok. I know it’s not the place to ask but does anyone know of a source for inox mudguards as the steel originals are full of rust holes.

Gary, welcome to the forum and Ducati ownership, sounds like you’ve taken on a big project there, but it will be worth it when it fires up, and also worth it financially,as bevels are going up in value all the time, do hope it gets done for your Manx trip.
Try Andy at Mdina Italia http://www.mdinaitalia.co.uk/ as your fist place for parts, or http://www.ducatipaddy.com/
Kevin.

Thanks Kevin for the leads and encouragement, I have already been to see Andy and given him a list of wants…my big challenge is to revive the rusted mudguards and source a side panel, one fell off in 1980 and was not recovered so looks as if some repro grp ones will be used. Another decision will be whether to use Contis or go for Keihan silencers, need to source the contis but I believe there is a shortage according to Harné Heuvelman at Back to Classics.
Gary

Yes, body parts can be the most difficult to find.
I’ve been running Keihans on my Darmah since the original Contis rusted through which was about 1990, they do have a different sound, and the ‘wrong footrest for the year’ type will moan ABOUT THEM, but they are well made and last forever.
Kevin.

Hi Kevin
Found some of my post’s from 2015 I’d forgotten I had joined the forum. Bike now finally completed and my brother got to ride it again, last rode it in 1985. But unfortunately we lost him one week ago only 62 but had fought myloema for the last seven years. I’ll try to upload a photo or two. 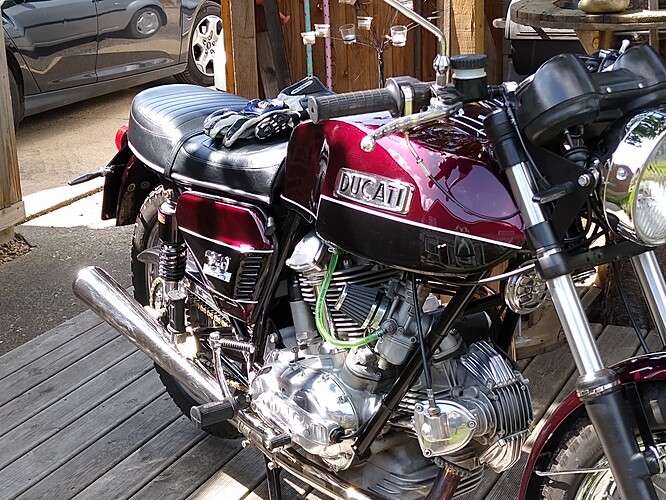