Greetings folks, I re-joined DOCGB 2 years ago when I bought a 998s.

I was previously a member around '77 to '84 when I owned a 450 MkIII. If anyone out there still has KEB970P I have a couple of old photos you may be interested to see.

And ‘welcome back’ Vincent from me! Perhaps you’d like to send to ‘Desmo’ the pics of your old and current Ducatis?

Yes, welcome, I hope you enjoy it, weather not too good for riding at the moment but we live in hope …

Live in Hope and die in despair!! Actually, there’s a village called Hope in Derbyshire …

I’ll pass on a photo of the 450 MkIII. When I bought it, all the bodywork etc. had been replaced with 450 Desmo bodywork. The previous owner had bought it from Mick Walker’s. She wanted a Desmo but was unable to kick one over, so went for the next best thing… It was also fitted with an Amal Concentric carb and one of Mick Walker’s own megaphones - a normal mod, I understand. I had terrible problems getting it to tick over smoothly, until I found out that the pilot jet was missing. Thanks to a rewiring guide in an issue of Desmo, I was able to rewire the bike completely so never had any electrical problems. Of course, I wish I still had it. I rode it to Spain in the summer of 1979 - it took some years for the circulation to return fully to my right hand.

Here is a photo of the 998S. Observant members will notice the Arrow cans and Gilles Variobars, but not the Dynojet Power Commander. It now has a JHP (NGR) clutch, a very worthwhile mod. Last summer I went to Ducati Coventry with a friend who wanted one for his 1098. John Hackett himself took us into the workshop and spent some time showing us how it worked. Talk about great service, I had to have one, including the obligatory vented clutch cover. 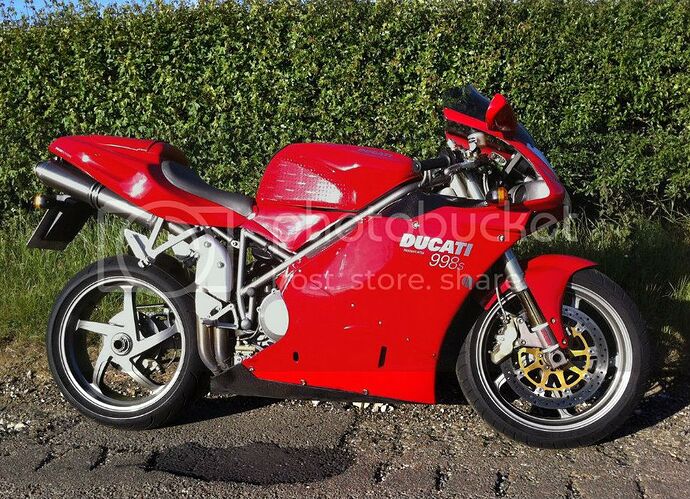