This from my desmo.org.uk site I think it would be better to have this info in more than one place…

Largly written and researched by Alan Yardley and members of the Ducati owners club- and frankly anything I have written is in the main things I have picked up from DOC members!!
Also, With big thanks to Ditch and Luca from the Pantaheads E mail list and all who contribute to the DOC(GB) E mail list.

I am gradauly cutting bits out of this posting and pasting them into seperate posings for each subject.

Fuel Tank
Later Pantahs with removable fuel cap allow ingress of substantial water which rusts the bottom of the tank. Solution is to treat tank with chemical liner and regularly drain.
Ignition
Ignition pick up wires can cause problems and are best replaced with Teflon coated or oil/heat resistant wire.
Gearbox
Second and fifth gears can blow but others seem to last forever. Primary gears have good life. Pantahs after frame number 660901 had a fifth gear ratio altered from 1:0.9 to 1:0.931.
Instruments
Replacement speedos can be found from Honda 550 K3 and 750 F2 but are a little optimistic in their readings.
Carbs
Transmission snatch below 3500RPM can be cured by filing out the cutaway on carb slides by an eighth of an inch if air screw adjustments don’t cure it. 40mm Dell’Orto pump jet carbs can be fitted if replacement manifolds are made up. K & N filters and ditching the airbox is a popular modification.

General
My Contribution Ignition Volt drop from battery to ignition units was found to be high (2.3 Volts) when start button pressed. This caused unreliable starting as ignition would only fire on release of start button. Cure was found by adding relay to switch directly from the fuse box to the ignition units. Result was a volt drop of only 0.2 volts and reliable starting even with a half dead battery. Due to regulator system, battery discharges even when ignition is off. Without replacing regulator the best solution is to remove earth battery lead when leaving bike standing for more than a few days (cheap) or use a battery charger suitable for permanent connection (£45). Electrical connectors are rubbish and have all been replaced by quality crimps fitted with a ratchet crimping tool. Fuse box corrodes badly. I found out that my bike is on it’s third fuse box. If it looks like happening again I will replace with something of higher quality. Koni dial-a-rides found to be under sprung and over damped (I’m 15 stone in battle dress. Front fork preloader tubes cut to 135mm. 200ml of 20 grade JP1 oil used.
Piston, bore and stroke choises
Now, to resume the complete matter, since I have already considered all mix-matches of parts (and as yet done none) and a friend has fitted 82 mm pistons to an Alazzurra 350 (BxS=62x51):

the early 500s (those with the “banana” fairing) had smaller holes in the 'box to accomodate cylinders, and the cylinders had accordingly a smaller outer diametre in the part that fits in the 'box. The holes were enlarged to accept the 600’s bigger bore cylinders and the modification was standardized on all Pantahs, including the 500, 400 and 350. This mod went more or less along with the new stronger “3 dogs” gearbox so if you have the old motor you will also have the weaker gearbox According to the Pantah’s part list (available at ducatimeccanica.com) the “old” cylinders and gearboxes are on motors nos. 600001 to 601653 and 602238 to 602528 while the new gearbox was fitted to motors from no. 603246 onwards My Pantah 500 has motor no. 600508 so it has both of the old things. ciao Luca

750cc in a Pantah. Just what combination of parts will I need to make a

I just checked in the manual, the Aly has an 82mm bore and a 61.5 mm
stroke.
Does this mean that I can bore out the liner and drop in a set of 88 mm
pistons? (Discounting the Nikasil liners or course) Or do I have to
find a set of barrels from an F1?

both options are possible. F1 (or Elefant-Indiana-early modern SS) cylinders will fit without mods.

Will the heads still fit? Would the crank have to be rebalanced. Can I
Changing 659 into 750….

do this on the cheap?

F1A had the same head as the Alazzurra so F1A pistons will match the standard head. Not F1B pistons. The Alazzurra was already under-valved as a 650 so imagine as a 750!

read all your posts on the pantah with interest top bloke!
dont suppose you know anything about a 900 supersport 89/90 cagiva model?

I don’t know anything, most of the tips come from people contacting me for my web site!

PS I could go on about klack valves, blast pipes and water injectors I guess, but thats not a lot of help with Ducati’s!

my misses recons i should get my Klack valve sorted, can’t keep blaming the dog!

Hey all! Longtime Pantah owner here, now in Canada, where the early years of these (anything pre-alazzura really) are as rare as rocking horse proverbials.

So, as quoted above, it seems to be common knowledge in the UK that the regulators on these beasts are hopeless, backfeed and eat batteries regularly. Locally, no one had heard of this, and when I asked the expert at Bevel Heaven if the regulator they had shown would fix they problem, they hadn’t heard of this either.

Does anyone have any idea why North American ones might have escaped this fault? My only theory is so few came over, it wasn’t noticed as a common fault, maybe no one was expecting much from electrics on a 70s bike.

Next question- any suggestions for a readily available replacement, anything to look for spec wise, or will anything suitable for this voltage & wattage do?

Due to regulator system, battery discharges even when ignition is off. Without replacing regulator the best solution is to remove earth battery lead when leaving bike standing for more than a few days (cheap) or use a battery charger suitable for permanent connection (£45).

That’s exactly what I’ve been doing so far- and I still chew through a battery every few years. I’m curious as to why its so commonly known in the UK and North America hasnt heard of it.

I’m also tempted to change the regulator- its not much more than a new battery here. 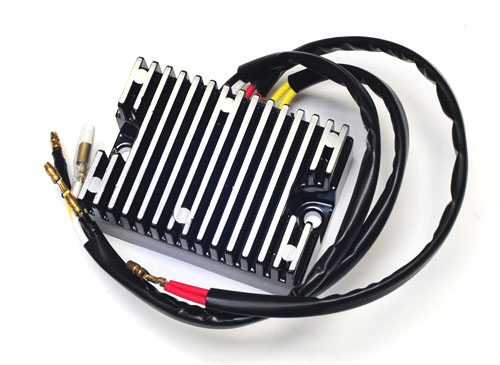