Racing commences 11:20am. Lunch break 12:10-12:55pm. Racing recommences 1:00pm and usually goes on till about 5pm.
I expect the classics to be out after lunch, with second race between 4 and 4:30 (the full raceprogramme has not been issued yet).

If you’re there, come and look me up in the paddock.

This proved to be a really popular meeting with full grids in most classes. Lots of top riders, and many getting signatures to qualify for racing on the Isle of Man.

In the Classics the grid was full, 30 bikes in the 350-500 class and 10 in the 250 class. Because the class was over subscribed, the reserves had to have their first races with the Forgotten Era bikes.

It proved to be a cold day, some rain, some hail, but a bit of sunshine too - overall not too bad.

The 250 Ducati didn’t feel too good when first started up, but felt a little better once warmed up. For practice we were held in the assembly area for quite a while as the track was cleared of broken down sidecars, but eventually we were released onto the track. I managed a corner, then the engine started to get fluffy and cut out at Cascades. Not much of a practice for me!

After getting a lift back in one of the recovery vans, spent the next couple of hours investigating, checking and changing things, with the odd ride up and down the paddock. Always difficult to tell if anything had done any good as it’s not possible to get any speed up, or even to get out of first gear in a paddock swarming with people. The only thing which seemed to make a possible difference was changing the spark plug - I put an old one back in which I’d changed for a new one at Anglesey. It was a frustrating wait for the qualifying race as I had no idea if the problem was solved or not - I couold easily end up doing half a lap and breaking down again.

Eventually the first classics race arrived. The 250’s started behind the 350’s and 500’s, so I was in position 36. In the first lap I got away from a few of the 350’s and 500’s and ended up having a fairly lonely race until one of the 350’s caught up again on the last lap. Having not had a practice, and having not had a full race at Oulton since 1996 (I suffered a broken wheel spindle there last year) I spent most of the race trying to remember the lines and figure out gears. The bike ran well though so I was much happier than I had been by the end.

The classics final was almost at then end of the day - race 17 of 18. This time I started from position 25 - my finishing position in the previous race. There were also more 250’s in the final as the reserves were able to compete following some other bikes having dropped out. Other than one other Ducati, all the other 250’s were 2-stroke twins. I got a decent start, getting past a few bikes, but getting past others too. I got caught by an Arial, an old adversary! The 2-stroke twin has more power and speed, but the Ducati’s handling on the corners is much better. We stayed together throughout the race. I could get along side at Cascades, but then he’d pull away. I’d then catch up and go round the outside of him at the Shell hairpin and stay ahead through the chicane, but he’d then fly past over hill top. On each corner I’d be on his back wheel, but then he’d pull away at the end of the lap, only for me to catch up again going into Cascades - and so it went on. He came in just ahead of me, but our best lap speeds were only 0.13mph apart. A great race - enormous fun.
We were fairly well down the 250 field - the Yamahas and most of the Suzukis were quicker, but I did beat the only other 4-stroke (also a Ducati) by 15 seconds - not his best race.

A big “thank you” to everyone who came along a braved the spring weather. The support, and help with problem solving, is always greatly appreciated.

My next meeting is in 2 weeks (April 25-27) at Anglesey. This will be my first meeting with the CRMC - the first classics only meeting I’ll have been to. Friday is a practice day. I’ve got 2 races on the Saturday and 2 on Sunday.
Hope some of you will come along and give me some support.

Lasted longer than we thought after ‘practice’ then Roger? Well done… 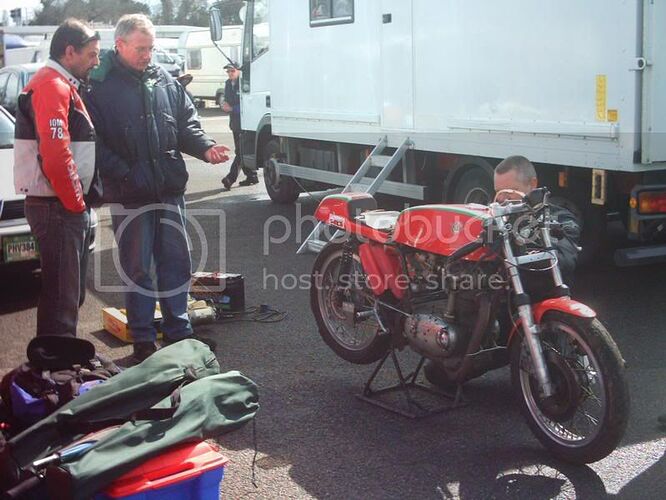 I’ll start the captions with “If that’s the gearlever, shouldn’t the forks be at this end?”