Hi All,
I have recently bought an ST4, It has only done 13k from new and the previous owner tells me he replaced the clutch with an aluminium one to cut out the clutch noise. My concern is the horrible clunk when you select first gear and the difficulty in getting neutral at a standstill.Are they all like that. I have read a few posts which suggests sometimes the incorrect amount of plates have been used during a rebuild and one needs to be removed. I intend to dismantle it and have a poke around. Some practical advice would be appreciated. Many Thanks. Simon.

No, they shouldn’t be like that.
Fitting an aluminium clutch basket is not a solution to the clutch noise. IME the clutch noise, over and above the natural noise of the Ducati dry clutch, comes from too much wear between the tangs on the clutch plates and the slots they sit in on the basket.

You have clutch drag so the plates are not separating enough when you pull in the clutch lever. Disassembling the clutch is a relatively easy task but before doing so make sure the clutch fluid has been thoroughly bled of air. There is a bleed nipple on the slave cylinder, I’m not 100% familiar with the ST4s arrangement but you may also have a master reservoir bleed nipple at the handlebars, if so bleed that one as well.

Once you’ve bled the clutch line and made sure there is no air in there, if it’s still dragging then repost here and we can move onto the next step.

Hi Again,
I bled about 3 master cylinders full of fluid through the system. Havent ridden it but still huge clunk selecting first. On the centre stand on tickover in gear, I can stop the rear wheel turning with my foot with a bit of pressure. I,m guessing next stage is to dismantle the clutch and see if the previous owner has rebuilt it properly.

Yep, if your’e sure there’s no air in the fluid then it’s time to take the clutch apart, it’s easy enough though, and take a look inside. There are just 4 bolts hold the clutch cover on, the only PITA is probably removing the fairing, I doubt their held on with Dzus fasteners like on the 916/996.

Apologies if I’m teaching you to suck eggs but not knowing what you do or don’t know, when you take the plates out there are plain and friction ones. Of the plain ones 3 will be thicker than the rest of the plain ones, they’ll be 2mm thick as opposed to 1.5mm thick. There should be two of these thick ones at the back of the stack ie nearest the engine, furthest in and the 3rd one is the last one in the stack ie outermost.

*One thing to note is that one of the plain plates will be concave. It 's only very slightly concave and you can tell it by placing it against a flat surface, when the concave side is uppermost you will see a very slight gap around the perimeter of it between it and the flat surface. It may also have a bronze tint to the edge of the teeth whereas the other plain plates don’t. It will definitely have a very very small dot on it’s surface in line with the notch on the outside circumference of the plate - although sometimes, the dot get’s filled with clutch dust and becomes hidden from view. This concave plate should be the 4th plate in your stack ie after the 2 thick plain and first friction plate. The dot should face outwards.

The clutch on the ST4 is the same as the 916 iirc so there should be 10 plates in total, 4 friction ones and 6 plain ones (one of which is the concave one).

If I could upload photos I would, an image is worth a thousand words.

Thats brilliant, Thanks, Ill let you know what I find. Much appreciated. Simon

Paul is bang on about noise being caused by clutch wear. ST4 uses a steel clutch set up - if PO has simply put alloy friction plates in the steel basket then he will only have made the siuation worse. Given that he was concerned about clutch noise it’s also possible that he tried the ‘quiet clutch’ mod? If the last plate you pull out is a friction one rather than a steel then he’s almost certainly done this - and got teh stack height wrong. It’s a good mod if done right. I found the following, which happens to use an ST4: http://www.ducati-upnorth.com/forum/showthread.php?19040-Quiet-Clutch-Mod
When I replaced the clutch on my old ST4 I used the complete set up from my 1100 Hypermotard and it worked fine. Cheers, Rob

Hi Paul,
I have managed to take the clutch apart and this is what i found. firstly the last plate to come out was a friction plate. and I have 8 steel plates, 1 x 1.5mm and 7 x 2mm and 8 friction plates. This seems completely contrary to everything. Any Ideas. ? I am quite mechanical, I have resored many bikes over the years.Thanks. Simon ps I note the clutch basket is gold coloured, so I,m guessing this has been replaced at some point.

That sounds completely wrongly assembled IMO. I managed to work out how to upload pictures

(just getting used to this forum s/ware) and that pic is from the Ducati Parts manual for the ST4 it show you the order and quantity of the plates. I would take 3 of the 2mm plain plates and position two first in then go friction, steel, friction, steel etc, use the 3rd 2mm plate as the last plate in there. You’ll have to use 2 more of the 2mm steels in the middle of the stack along with the 1.5mm steel. If you can identify the concave one that would helpful as well, it will be 1.5mm thick. Rebuild the stack as per the part diagram and then reassemble the rest of the clutch.

It sounds very much as though you have too many of the wrong sort of plates in there. This would increase your stack height above the recommended service level and would lead to clutch drag.

If the basket is gold I’m assuming it’s an aftermarket one which is fine.

Hope this cures the clutch drag for you.

Thanks, your correct the stack height is just short of 41mm. rebuilding it back to standar leaves me one steel plate short with one friction plate to many. I have rang my local ducati dealer, snells, they are having a rummage around the bins for asingle plate for me. I think the previous owner has attempted the quietening mod, but has failed to realise that the inside face of the new basket is curved, so putting a friction plate in first is a waste of time as it has nothing to press against, and for some wierd reason has added an extra plate as well. makes no sense. Thanks again for your help.Simon

Hi Again, All back together, sadly no difference, everything as standard. still massive clunk into first and moving into second and impossible to get neutral at a standstill. The bike although its 20 years old, has only done 13000 very dry miles from new, according to the previous owner. Could it be its had too sheltered a life and simply needs a good hammering. just a thought. Simon

Hmmm. I’ll have to do a bot more research into what is the correct stack height for the bike and also the minimum size for the springs as the 6 springs can wear over time and go out of working tolerance. The drag issue will be due to there being insufficient movement of the plates when the clutch lever is pulled back. This will be due to:

What you could try is removing the last steel plate and friction plate, just as an experiment and see if that cures it. If it does then its the overall stack height we have an issue with.

I wouldn’t recommend riding it around like that as you’ve probably removed too much ie 3.5mm (2mm steel + 1.5mm friction) and you’ll probably experience clutch slip under hard acceleration, but at least, if it cures the drag, we know the issue is solely due to stack height.

The fact you have mostly 2mm steel plates rather than 1.5mm could very well be the cause of the issue as just 1mm can be the difference between being perfect and dragging.

Just a thought, is the slave cylinder standard or an aftermarket one eg Oberon?

Anyway, I’ve been re-reading the thread. You say your stack height is just under 41mm but if you assemble as per the parts diagram above you should have 23.5mm as most of your steel plates bar one are 2mm. How do you get to 41mm?

Hi, I might be being a complete plonker, Ill disassemble it again tomorrow and post some photos so you can see how Im getting my measurements. Thanks for your patience. Simon 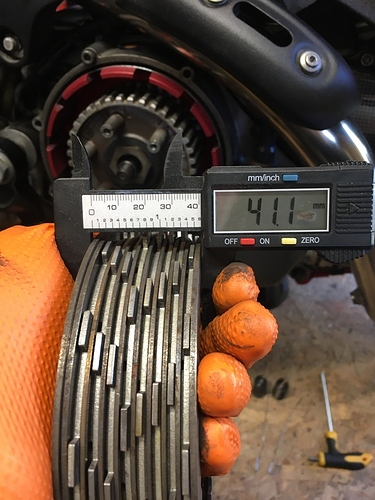